I’ve just finished reading Nurture Shock, by P.O. Bronson and Ashley Merryman, while flying to Kalisz, Poland for our semiannual clinical visit to work with autistic children there. This book is a paradigm-shifting must read for any parent who wants a more effective, happier child (and parent!). I call it iconoclastic, and earthshaking because the authors give us powerful new discoveries which will change the thinking and behavior of parents and the way we parent our children. In each chapter, time honored beliefs about how children grow and develop are shown, at best, to be inaccurate, and in many areas, to be outright backwards. Let me elaborate a bit.

We think of praise as a primary and appropriate reward and incentive for our children. However, vigorous research presented in this book demonstrates that we commonly disempower children by praising their attributes or outcomes (“You’re so smart,” “You color so well,” “You’re the best”, etc.), leading them to lose confidence. If instead, children are praised for their effort or process, they choose challenges, and will be much less apt to cheat or lie when challenged. Examples of this are: “You really worked hard on coloring that,” “You’re learning your numbers so fast,” “That hill was a hard climb,” etc. Also, children respond and perform better when they receive constructive criticism, attending to failure, rather than blanket praise and brushing off mistakes.

kids experience of diversity doesn’t work in itself to promote tolerance. What works is talking with children openly about diversity and race, starting in the preschool years. Children need to hear about integration, about skin color differences through conversation with parents, to learn to choose interracial friendships, rather than sameness.

IQ testing in preschoolers is terribly inaccurate for predicting school success or giftedness. Nevertheless, the vast majority of schools use very early IQ screening for access to talented and gifted programs. Test results are assumed to be valid through the school years, and children are rarely retested. This approach excludes a large percentage of gifted “late bloomers” or kids with different learning styles, and profoundly impacts their educational opportunities. IQ changes significantly as children’s brains develop, continuing even through high school.

It appears that sibling rivalry and conflict is not, as Freud proposed, primarily about competition for parent attention. Research suggests that a much stronger influence is competition for toys, and the lack of shared fantasy play. Efforts to reduce sibling conflict by teaching kids to be nice have been much less effective than teaching kids to enjoy playing together and to negotiate for what they want to play. Also, helping them to engage in fantasy play is powerfully effective at reducing conflicts and promoting harmony.

With regard to lying, most parents feel that honesty in their child is one of the most important virtues to instill. But studies show that over 95% of children lie. In fact, some researchers consider lying to be a developmental milestone, as it is more complex than truthfulness, and more difficult to accomplish effectively. In autistic children, we certainly celebrate when they tell their first lie! Young children often have difficulty recognizing our intentions, feel lied to when our announced plans fall through, and often lie to us in trying to please us. They seem to respond better to teaching about the value of honesty than the harm of lying, and can begin to learn at a very early age.

Teenagers, in the vast majority, also lie, by commission, and frequently by omission. Researchers found that, rather than protecting themselves from trouble, the most common reason for their lying was to protect their relationship with their parents, like, we parents can’t take it, and so they mercifully spare us from the whole truth. Another aspect of teens, with which we parents struggle, their argumentativeness and anger, is often a healthy aspect of growth and development. From their perspective, argument and conflict is inevitable and essentially harmless. Listening reflectively and making small concessions can greatly improve harmony in the home.

As we parents have suspected, teenage brains are very different from our own. They don’t respond much to rewards or stimuli, unless they are intense. And when responses occur, the prefrontal cortex , the center of judgment, executive function, seems to go off line. And so when a teenager is speeding down the road, his capacity to evaluate danger is diminished, relative to the actual stimulation of being in danger.

Regarding aggression problems, there is a strong correlation with both educational and violent television exposure. The correlation with aggression was almost as strong for children watching violent television as for those watching educational television. One identified factor is the fact that most commonly, negative interactions are portrayed without resolution of the conflict. The same held true for parental discord: children were not negatively impacted by parental arguments if they saw resolution instead of escalation. In fact, marital conflicts could be a positive developmental influence if carried out openly rather than taken behind the scenes where the child is “shielded” from the outcome.

If you skim this book, don’t skim the chapter on teaching self-control, as it presents an amazing set of findings. Where large programs such as driver’s education and D.A.R.E. have had minimal impact on target behaviors, a new approach in education is producing dramatic changes in academic performance, behavior, and executive function in preschoolers and kindergarteners. The Tools of the Mind program has demonstrated that children learn best from play, that they can learn to be intentional about their play, planning their fantasy roles and carrying them out. 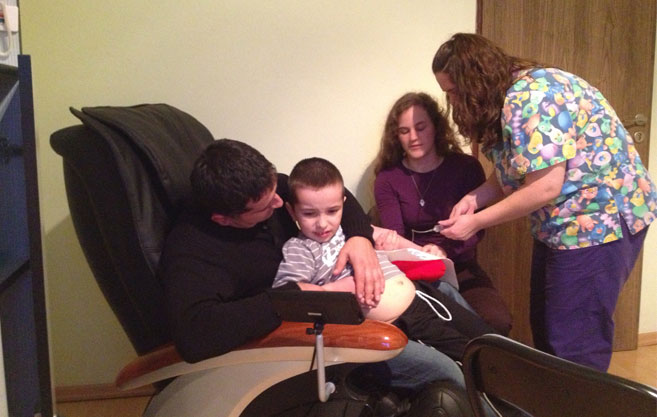 They can profit from evaluating each other’s and their own performance, and in this process learn self-regulation and self-control. The techniques used in Tools of the Mind can well be extended to training and teaching at home and in life.

Our love affair with Baby Einstein and other types of electronic teaching techniques for babies and toddlers is brought into strong question by research presented in this book. Studies are showing that language acquisition occurs not from hearing speech, but from hearing, seeing the speaker, being touched and receiving affirmative responses from the parent. Parent response to baby’s sounds is a strong and prompt reinforcement for the baby to make more sounds. Our relationship and response to our children is our most powerful tool for teaching.

Read this book and extract a few of the many pearls presented to incorporate into your life as parents. Even for a nonverbal autistic child, there will be notable benefits, as you learn to praise appropriately, to interact differently, and to trust his capacity to learn even through conflict and discord. Bring the Tools of the Mind ideas to your school, and introduce those ideas which can be implemented with your child. And finally, let me know about your experience!